Heading clear across the country to Napa Valley, California from their home base in Stevensville, Maryland, Copeland Motorsports is hoping the drive is worth it as they look to continue their massive winning streak. Claiming victories, podiums and top-five results at the Virginia International Raceway in TCR and TCA in the TC America series, Copeland Motorsports also led the way at the opening event of the Global MX-5 Cup program at Road America.

“Our 2020 restart has been successful, and we look to continue our winning ways at Sonoma Raceway,” explained Dean Copeland. “Tyler Maxson has gone five-for-five in TCR while Tyler Gonzalez claimed a win and three podiums at the last event. Team newcomer Luke Lange has shown great speed and secured a top-five finish in his first TCA event and his first event with our program.”

Bringing three drivers, Maxson will be the sole entry in the TCR category and has already gone five-for-five on the season. Courtesy of his race wins and a worldwide Balance of Performance (BOP) adjustment, Maxson and all the Hyundai Veloster N TCR drivers will be reduced to 95% of power allotted as he will have to push just that much harder when the green flag flies.

Gonzalez and Lange will fly the Copeland Motorsports flag in the TCA class as between them, the duo scored four top-five results including three podiums and one race win at the Virginia International Raceway. With Gonzalez having to endure an overnight engine change before qualifying at the most recent event, the Floridian went on to garner three podiums and the win on Sunday as he looks to carry that momentum into California. 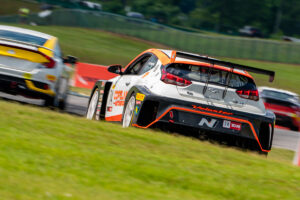 Texan Luke Lange moved through the first event weekend with speed and success. Finishing all three races with a best result of fifth, Lange is driven and determined to put Gonzalez and himself at the front of the field. As the SCCA June Sprints Champion, Lange knows what it takes to be at the front of the grid.

Copeland added, “Tyler and Luke are a powerful one-two punch in TCA, and I expect both of them to be at the front this weekend.”

Copeland Motorsports drivers will be on track for three wheel-to-wheel events this weekend beginning on Friday afternoon while a Promoters Test Day and Practice Day will kick off the on-track action in the middle of the week.