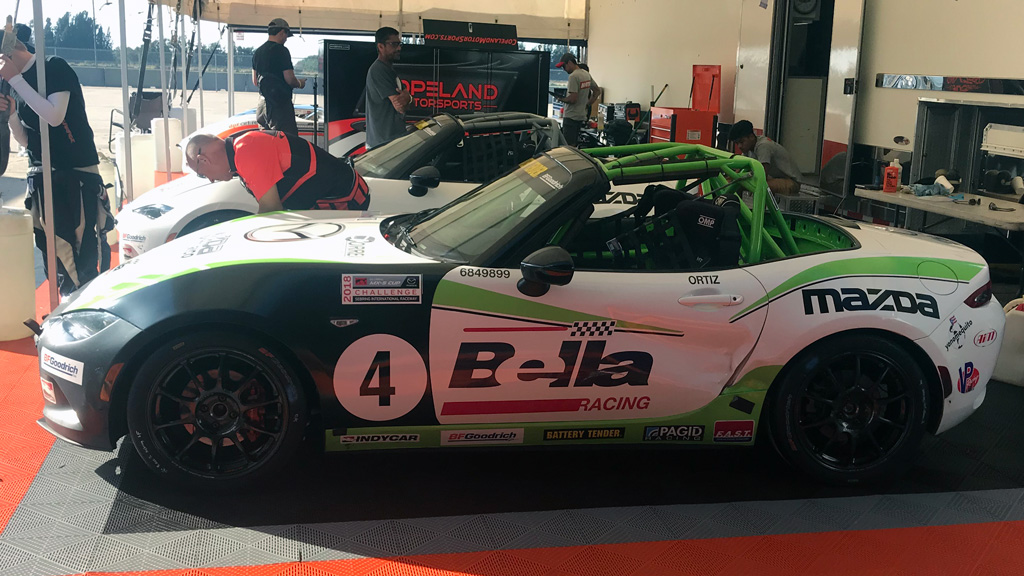 Traveling south to the Sebring International Raceway for the Battery Tender Global MX-5 Cup Presented by BF Goodrich Tires Challenge, Copeland Motorsports entered four fast and capable drivers in the 2018 finale event. When the dust had finally settled and the final checkered flag had flown, the Stevensville, Maryland operation scored four top-ten results including a sixth, a pair of sevenths and a ninth in the two wheel-to-wheel races on the weekend.

After only one thirty-minute practice session on Friday, Copeland Motorsports drivers were on track on three separate occasions on Saturday with practice two, qualifying and the first wheel-to-wheel action of the weekend.

Leading the quartet in qualifying was Bryan Ortiz who turned in a solid effort turning the tenth fastest lap of the session. Thomas Bernacki followed closely behind in 13th with 14-year-old Tyler Gonzalez in 15th and Japanese driver Racer Kashima in 18th. While the results were not what team boss Dean Copeland was hoping for, he was excited about getting into the racing portion of the weekend that afternoon.

“In practice, it is hard to tell if everyone is showing their true hand or if drivers are holding back,” explained Copeland. “We had some drivers with some unlucky track positioning in qualifying which hurt their end result but I know we have the pace to drive forward.”

Gonzalez proved to be the biggest mover of the race as he charged forward eight positions to finish seventh after starting in P15. Bernacki was poised for a top-five result before on-track contact relegated down the running order. Mired back in the mid-teens, Thomas drove like the veteran he is and secured a ninth-place finish when the checkered flag had flown. Unfortunately, both Bryan Ortiz, who had an engine issue, and Racer Kashima, with a broken transmission, were both forced to retire from race one and classified in 18th and 19th respectively.

Back to the track Sunday for race two, the starting grid was set based on fastest race laps in race one. Though Gonzalez scored the best result for the team, his lap time would only line him up on the outside of row seven while Bryan Ortiz and Thomas Bernacki solidified their positions in row five in the ninth and tenth positions. Kashima, who was an early retiree in race one, was forced to start in the 18th position as he looked to march his way forward.

It was Bernacki who scored the best results for Copeland Motorsports on Sunday morning by virtue of his sixth-place finish. Ortiz ran inside the top-five and was less than a second behind the leader before falling just outside the top-five and behind Bernacki in P7. Tyler Gonzalez could not repeat Saturday’s drive as some first lap argy-bargy caused him into a spin and relegated him down the running order. Running most of the race by himself and unable to close the gap on the field in time, Gonzalez finished in the 16th position, just ahead of Racer Kashima in 17th.

Copeland continued, “This marks the final event for us in 2018, but tomorrow we start on prepping for our 2019 season. We have a few opportunities within Copeland Motorsports and all interested drivers are invited to contact us.”