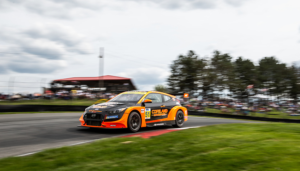 It was another top-five finish for Copeland Motorsports at this past weekend’s IMSA Michelin Pilot Challenge event at the famed Mid-Ohio Sports Car Course. With the #51 entry of AJ Muss and Mason Filippi leading the team on the results board through the first two events, it was the teenage duo of Tyler Gonzalez and Tyler Maxson that earned their first top-five finish of the season with a fourth-place effort.

“Mid-Ohio is a tricky place to make sure that all cars have equal performance, but the series did a good job and I think we did what we could this weekend,” explained Copeland Motorsports’ Dean Copeland. “Both cars showed great speed and the #27 car of Maxson and Gonzalez drove forward from their ninth place starting spot, lead laps and put themselves in contention for the win. Great job by all and now we prepare for the next one.”

After qualifying on the inside of row five, Gonzalez led the field to green and quickly began to move forward. Handing the steering wheel to Tyler Maxson during the driver change, Maxson was able to lead laps late in the race and battle at the front of the field. With time ticking down, Maxson would eventually cross the stripe in the fourth position, the first top-five result for Maxson and Gonzalez in their rookie season.

Copeland added, “The speed for TnT is there and they proved that with their front row starting spot in Sebring and driving forward this weekend. They will win a race this year! A huge shoutout to the Copeland Motorsports crew on the driver change pit stop, entering the pits in fifth and leaving in first to lead a majority of the second half of the race.”

On the other end of the spectrum, the #51 entry of Muss and Filippi had been a model of consistency leading into the Mid-Ohio weekend. After a tough qualifying session that saw the duo claim only the thirteenth quickest lap time, they managed to work their way forward and put both of the Copeland Motorsports entries in the top-ten.

Copeland continued, “I really like how our program is gaining knowledge with each weekend. We are still really new and taking it all in stride. We have a great partner in Hyundai and great drivers, so we are happy and confident about the future.”

It will be six weeks before the Copeland Motorsports IMSA Michelin Pilot Challenge program has their next event weekend as they need to wait until the June 24-27 event weekend at the Watkins Glen International Raceway that will feature the second four-hour race of the year.