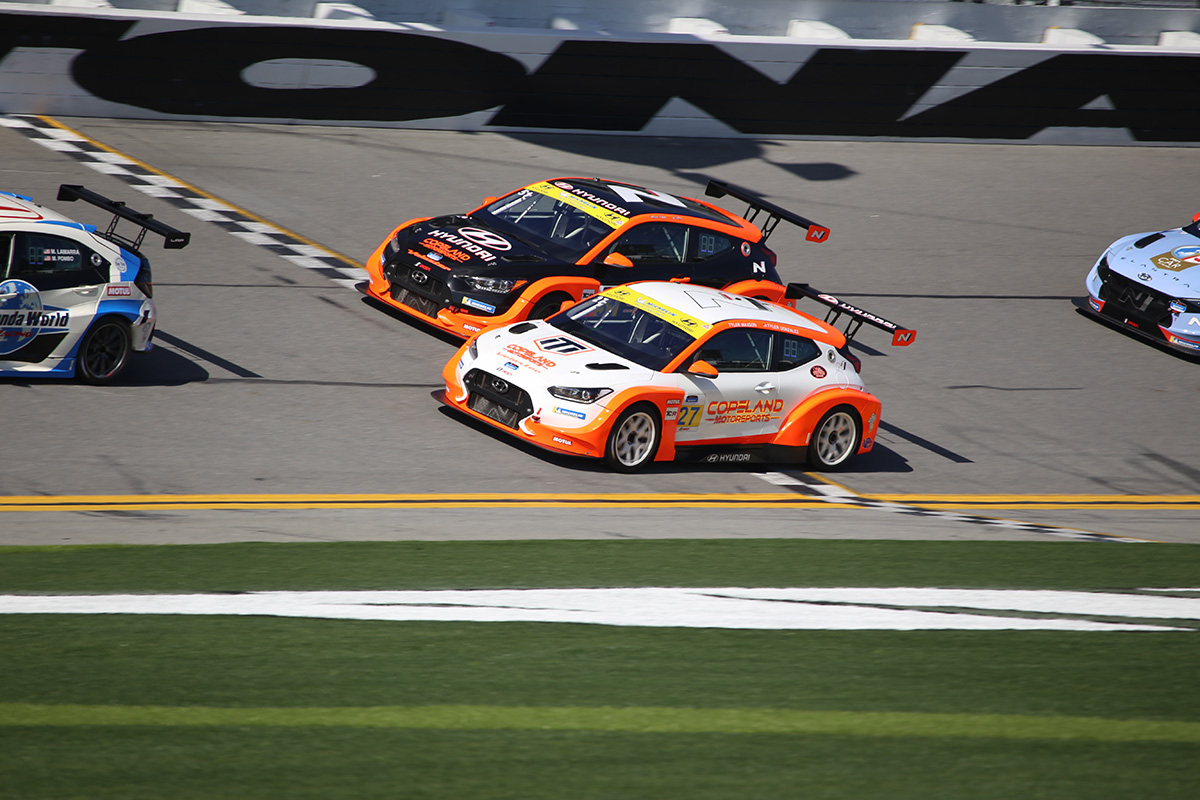 With the first green flag of the 2021 IMSA Michelin Pilot Challenge season this past weekend at the Daytona International Speedway, Copeland Motorsports entered a pair of Hyundai Veloster N TCRs as they looked to start the season off right. With a four-hour event taking place on Friday afternoon of the famed Rolex 24 race weekend, Mason Filippi and AJ Muss would score the team’s best finish crossing the line fifth.

After qualifying seventh and eighth, the two Copeland Motorsports entries would roll off the grid Friday afternoon in row four as they looked to advance up the running order. With strong race cars, the hopes were high for both the #27 and #51 Hyundais, but disaster would strike early for the teenage duo of Tyler Maxson and Tyler Gonzalez.

“We had a mechanical issue on the #27 and that put us behind the wall for repairs early on in the race,” explained Copeland Motorsports’ Dean Copeland. “The crew went to work, diagnosed and fixed the problem which took several hours. When the Tyler and Tyler duo returned to the track, they showed great pace and that is something we will build upon for the next race.”

With the focus of a great result now of the #51 entry of Mason Filippi and AJ Muss, the pair drove a near flawless race to earn a top-five result. Running as high as P3 on pit stop exchanges, Muss kept the car clean before handing it off to Filippi to close the final two hours. Taking advantage of some cautions that bunched the field on several occasions, Filippi was able to attack and cross the line with a fifth-place result and putting three Hyundais in the top-five.

Copeland continued, “It was a solid debut for Mason and AJ who turned their first laps together this past week and drove to a fifth-place finish. As we roll through 2021, I am confident that they will be a threat for race wins and podium results, as will Maxson and Gonzalez. We will now head back to our home base and immediately begin preparations for the next event.”

Taking the positives from the first event of the season, Copeland Motorsports will now aim for the top step of the podium at the Alan Jay Automotive 120 at the Sebring International Raceway in just over six weeks. Taking place over the Mobil 1 Twelve Hours of Sebring weekend, Filippi, Muss, Maxson and Gonzalez will be back on track March 17 – 20th.