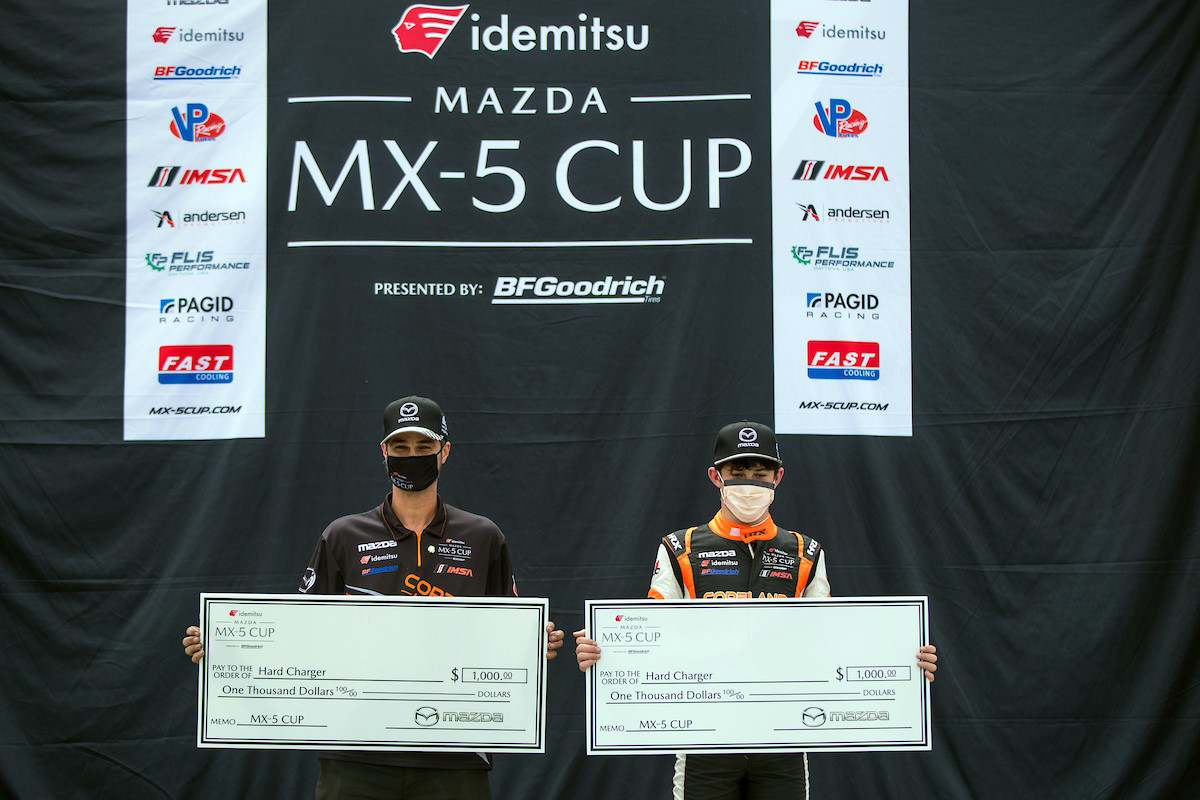 In a busy weekend that saw six Copeland Motorsports entries on track across two different race programs at the Mid-Ohio Sports Car Course, it was Luca Mars the earned the team’s best result in their Mazda efforts. Taking on the Idemitsu Mazda MX-5 Cup Presented by BFGoodrich, Mars scored a pair of top-ten finishes, including a third-place podium result on Sunday, the first of his career, as he continues to come into his own as the series crosses the mid-season point.

“The competition in the Mazda MX-5 Cup program continues to get better and better each and every year,” expressed Copeland Motorsports’ Dean Copeland. “It is a dog fight week in and week out to make sure you can find just that little bit to get ahead. Track positioning is key, and we can see that in the results from the past two events.”

After qualifying in the 11th position, Mars steadily improved his results throughout the race weekend gaining four positions in race one to finish seventh and drove forward from his 16th starting position in the second wheel-to-wheel action on the weekend to finish fourth on track, but third on the results sheet as following post-race technical inspection, it was deemed that the winner was found to be non-compliant and removed from the results. The disqualification moved Mars into P3 and his first MX-5 Cup series podium result. Fresh out of karting and using the Idemitsu Mazda MX-5 Cup Presented by BFGoodrich to learn the characteristics of sportscar racing, Mars is gaining experience with each passing lap. Additionally, Mars earned the Hard Charger Award for both races on the weekend.

Dan Williams was able to turn his 12th place qualifying run into a top-ten result in race one as he crossed the line in tenth. Hoping to score another respectable finish and help Copeland Motorsports make their push to the front of the grid, on track positioning and minor contact pushed Williams down the running order to an eventual 18th place result.

2019 Series Champion Bryan Ortiz had an uncharacteristic weekend as he was mired back in the 19th position after the one and only qualifying session. Improving to finish 16th in race one, Ortiz scrambled to gain three more positions in race two to finish 12th. Peter Atwater leveled up two positions in race one from his qualifying result to finish 22nd but issues in race two forced him to the sidelines and out of the race.

Copeland continued, “We will begin preparing for our next on track session the minute we get back to the shop and see what we can do to improve and where. Congrats to Luca Mars on a solid weekend and I know a win is in his cards in the very near future.”

Following the strong results by Mars at Mid-Ohio, he currently sits 80 points back in the Rookie of the Year Championship after entering the event weekend 230 points behind.

With only three event weekends left in the 2021 season, the next time the Idemitsu Mazda MX-5 Cup Presented by BFGoodrich Copeland Motorsports drivers are on track they will do so at the picturesque Road America in Elkhart Lake, Wisconsin over the August 6-8 weekend.