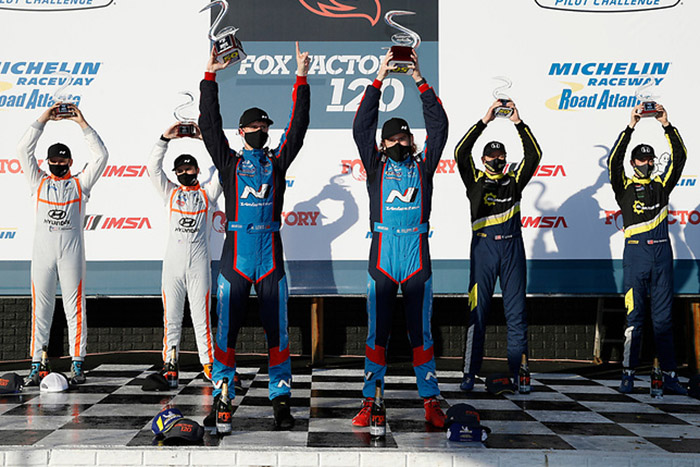 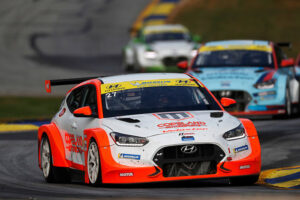 It was a weekend of firsts for Tyler Maxson, Tyler Gonzalez and Copeland Motorsports as the trio entered their first career IMSA Michelin Pilot Challenge event at Road Atlanta. Piloting a Hyundai Veloster N TCR, the teenage duo qualified in the sixth position before leading the race in the late stages and eventually finishing in second, a scant .099 behind the eventual race winner to make it a Hyundai one-two finish.

“What a great weekend,” explained Dean Copeland. “Our first IMSA event was a success. To take two drivers, teenagers who are barely legal on the street, and put them against some of the best IMSA regulars and watch them do what they did was awesome. Definitely turned some heads and is proof that the future is bright.”

After progressing through their first official IMSA practice days, the Copeland Motorsports duo of Maxson and Gonzalez entered qualifying on Thursday afternoon for the Fox Factory 120. Pacing the session early and sitting atop the charts when a red flag slowed the session progress, the #27 entry would fall to sixth after the session resumed and before the checkered flag flew to start Friday’s event from outside row three.

With Gonzalez taking the wheel for the first portion of the two-hour event, the multi-time TCA race winner kept the Copeland Motorsports entry clean and moved forward to put the team in position to attack later in the race. A near perfect pit stop saw Maxson jump behind the wheel and run second until a late race caution. Taking the lead and holding it until two minutes remaining, the #27 dropped back to second and though mounted a last lap challenge, had to settle for the second step on the podium. 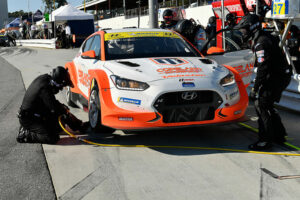 “The IMSA program is such a professional environment and somewhere that I would like to be in the future,” explained Gonzalez. “We had a great car and a great crew behind us so the result may surprise some, we expected to be fighting for the win.”

“IMSA is a different type of racing than I am used to, but I like it!” added Maxson. “While we did not end up on the top step of the podium, we sure mounted a good charge. It was awesome to race alongside Tyler, and I think we could make a pretty powerful pair for the future.”