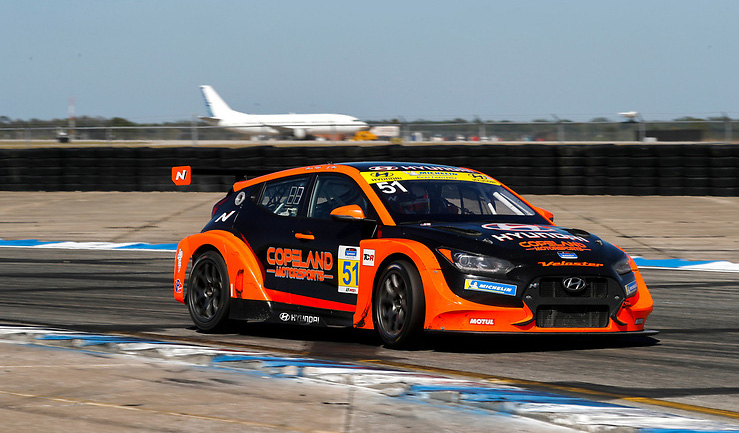 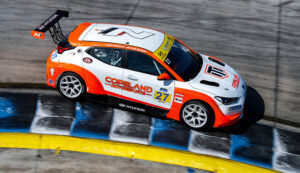 This past weekend, Copeland Motorsports returned with IMSA Michelin Pilot Challenge for the Alan Jay Automotive Network 120 at Sebring International Raceway. With two Hyundai Veloster N TCR entries, Tyler Maxson and Tyler Gonzalez piloted the #27 with AJ Muss and Mason Filippi entered in the #51.  The two-hour race took place on Friday leading up to the Mobil 1 Twelve Hours of Sebring Presented by Advance Auto Parts.

As the youngest entries in the series, Maxson and Gonzalez started their weekend strong finishing second and seventh in the two practice sessions and qualifying on the front row with a P2 effort – their best qualifying position in the IMSA Michelin Pilot Challenge. Minutes before the race was set to begin, the #27 entry experienced electrical issues on grid and missed the first seven laps of the race before being able to get back out and gain two positions for a thirteenth-place finish.

“It was another disappointing weekend for the #27 entry,” said Copeland Motorsports’ Dean Copeland. “They both showed great pace and were on track for a strong finish this weekend, but after the electrical issues put us behind, our goal was to get them back out to gain experience and make up as many positions as possible.”

After qualifying just outside the top-ten, AJ Muss and Mason Filippi were determined to make up positions over the course of the two-hour race. With Muss completing the first 25 laps, he was able to move the car up into seventh before drivers began pitting for driver changes. In the second half of the race, Filippi was able to get their Hyundai Veloster N up into the top-five before ultimately crossing the finish line in sixth.

“AJ and Mason once again had a solid race weekend with their sixth-place finish,” continued Dean Copeland. “They were able to move their way up the running order, and I am confident that they will continue to improve as the season progresses and they will be batting for podiums soon.”

“It’s unfortunate that the #27 has had two back-to-back races where they have been unable to fight for wins due to no fault of their own,” said Copeland. “They have shown that they can run at the front, so now we will head back to the shop and get the electrical problems sorted so we are ready and confident at the next event.”

Copeland Motorsports now has another seven-week break before heading to Mid-Ohio Sports Car Course for the Mid-Ohio 120 the weekend of May 14th-16th.