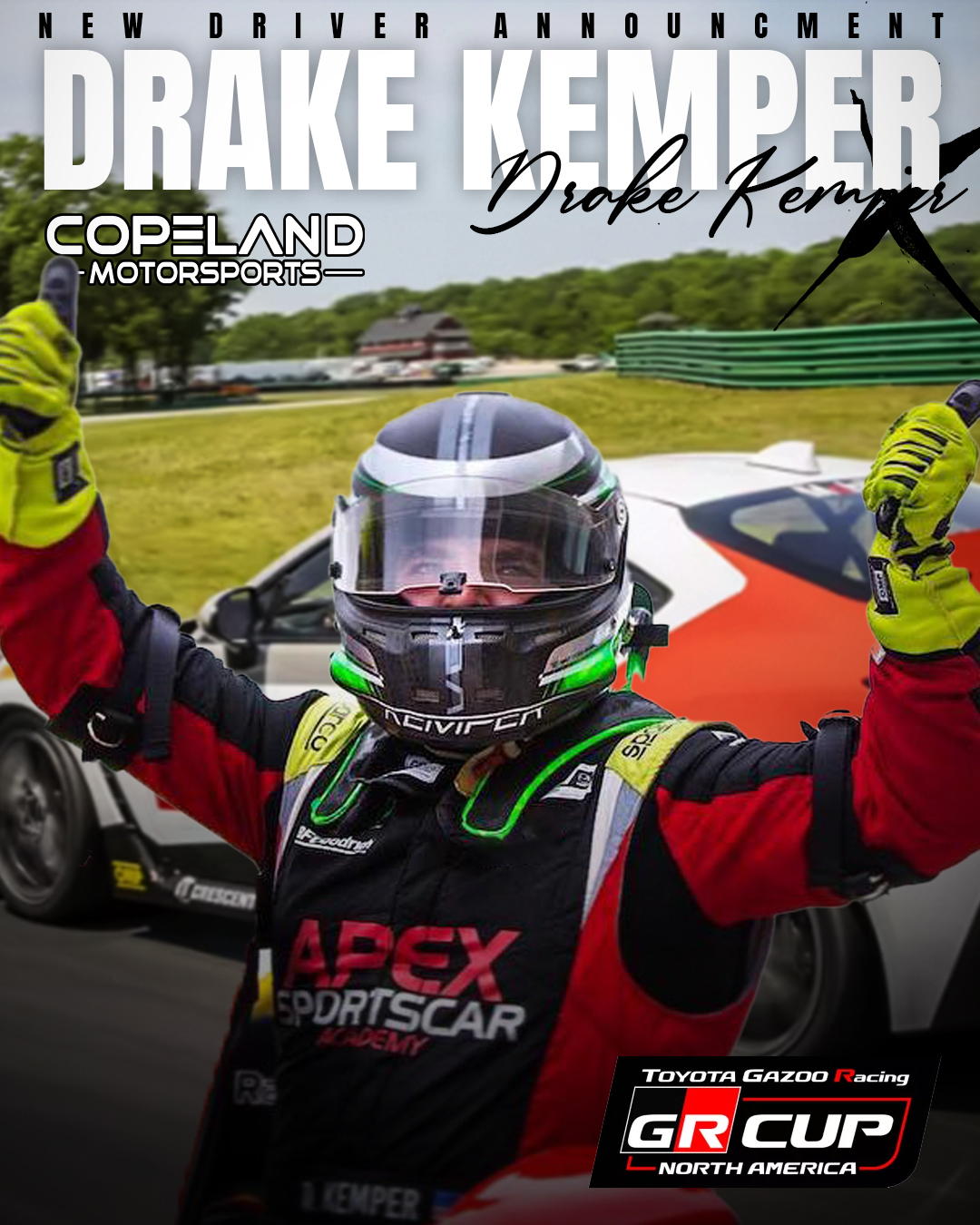 With the inaugural Toyota GR Cup North America program on the horizon, Copeland Motorsports is pleased to announce its newest signing. Joining the 2023 squad, Drake Kemper will look to take his championship-winning skills to the top step of the podium as he and Copeland Motorsports are just a few pieces of a growing and powerful puzzle.

A former Mazda MX-5 Cup driver and a competitor of Dean Copeland’s from 2015 to 2018, Copeland speaks very highly of his newest driver.

“Drake and I were fierce competitors back in the day, so I am happy to have him racing for us, and not against us,” explained Copeland. “The Toyota GR Cup is a new program for us, but we have had much success with the spec style series and cars, so I am expecting no different in this program.”

Not growing up in racing and never competing in competitive karting, Kemper was a childhood actor who was looking for a hobby. Purchasing a racecar to have some fun in his teenage years, Drake turned heads with his natural talent and speed. Progressing as the years went on, Kemper began coaching in 2012 and has continued that passion to today.

With pro racing experience from 2013 through 2020, Kemper was the 2014 MAZDASPEED Pro Challenge Champion. Spending four seasons in the Mazda MX-5 Cup program, Kemper had the highest podium percentage of any driver standing on the podium steps in 54% of his races up until the 2020 season. Spending an additional year in the IMSA paddock racing Porsches, Kemper joins Copeland Motorsports with many years of experience.

“I took some time off from racing to pursue a career in the live streaming platform,” explained Kemper. “I am excited to make my return to the paddock and could not think of anyone better to do this with than my good friend Dean. We have some cool things planned for 2023 including Live Streaming of my races from the cockpit at Twitch.tv/Sweet4U.”

Copeland added, “We have not had this much excitement in a series for quite some time. I can’t wait to get a new year of racing started, but first, we have a few more events to win in 2022.”

With six months until the first race of the 2023 season, Copeland Motorsports and Drake Kemper will complete several test days prior to the first green flag at the famed Sonoma Raceway.