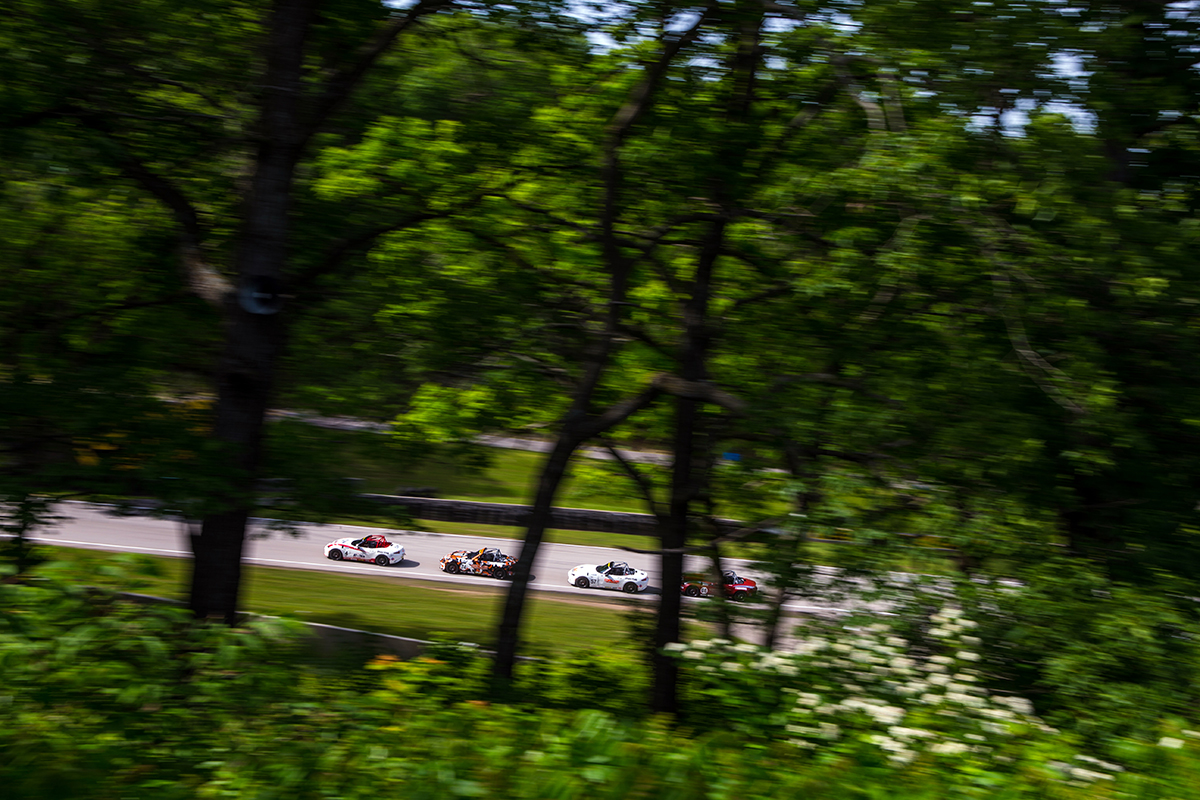 Claiming race wins and podium results in the Battery Tender Global MX-5 Cup Challenge Presented by BF Goodrich this season, Road America was not kind to the Maryland based program. While most teams would be ecstatic about six top-ten results with five drivers, Copeland Motorsports entered the weekend as the current point leader, 1-2-3 in Rookie of the Year points as well as all four of their drivers in the top-ten in points, but did not walk away with a podium or race win from Elkhart Lake, Wisconsin.

“It wasn’t for speed or hard work,” expressed Dean Copeland. “Our guys put in a tremendous effort both on and off the track. The speed was there and at one point during Friday’s race we were running first, second, third and had four cars in the top-ten but unfortunately, it was not on the lap that counted.”

Leading the team with results this weekend was rookie, Michael Carter, and point leader entering the event, Bryan Ortiz. As the duo battled hard to gain as many points as possible in the overall series championship, both drivers walked away with fifth and sixth place finishes as they flip flopped results in rounds five and six.

14-year-old Tyler Maxson showed great pace and led his first Global MX-5 Cup laps on Friday before being shuffled back after contact to claim the eighth position. Returning to the track Saturday, Maxson was a victim of going four wheels off to miss a spinning car, losing the draft and ending his day in tenth, continuing his string of top-ten finishes.

If Tyler Gonzalez did not have any bad luck, he would have had no luck at all this past weekend. With a car that had speed capable of winning, Gonzalez was involved in an unfortunate incident that virtually destroyed his Mazda MX-5 Cup car.

Copeland continued, “The car bottomed out hard when the curb ended and snapped right, then left, and there was nothing that Tyler could do to catch it. The crew did a great job to piece everything back together, but after a hit like that, you never know what you are going to get.”

Joining the team this weekend was Wisconsin native Eric Palmer. Racing with the winning program, Palmer got an introduction to Global MX-5 Cup racing and the level of competition in the series. Consistently improving throughout the weekend, Palmer finished 25th on Friday before ending his weekend with a 24th place result on Saturday.

With a few weeks away from the track, Copeland Motorsports will return back to their shop in Maryland and begin preparation for the upcoming TC America race at the Portland International Raceway in less than three weeks’ time. Looking forward, the next round of the Battery Tender Global MX-5 Cup Presented by BF Goodrich will take place July 26-28 at the Mid-Ohio Sports Car Course in Lexington, Ohio.