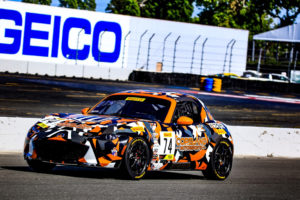 It was a race-winning weekend for Copeland Motorsports as the multi-driver team grabbed three victories at Sonoma Raceway in TC America competition. Making their 2019 series debut with the Hyundai Veloster N TCR, Mason Filippi scored the race two win while 14-year-old Tyler Maxson drove his Mazda MX-5 to victory in TCA in both wheel-to-wheel races over the June 7-9 weekend in the heart of wine country.

“I could not have asked for a better weekend in California,” explained Dean Copeland. “I think we could have gone four for four but lapped traffic changed the outcome of Saturday’s results. It was a great debut for our TCR program and in TCA, Tyler Maxson was virtually unbeatable.”

Qualifying first in class and first overall, Mason Filippi’s speed on Saturday rolled over from his Friday practice sessions. Closing the day with the fastest overall lap in TCR, Filippi turned his pole position into what looked to be a race winning performance until lapped traffic changed the outcome of the race drastically. 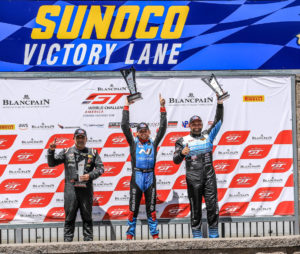 Copeland added, “Mason was on rails, and we looked to be in good position for our first win of the weekend, but contact with a lapped car ruined any chances of victory. Salvaging a top-five finish, Mason returned Sunday with one goal, victory.”

Lining up on the pole position for race two, Filippi and his Hyundai Veloster N took the lead early and never looked back. In a dominating performance, Filippi and Copeland Motorsports took the victory by nearly three seconds, the team’s first with their new Hyundai TCR program.

Success would also come from Tyler Maxson in the TCA class. Piloting a Mazda MX-5, Maxson was the class of the field all weekend long as the 14-year-old was rarely not at the top of the charts. Pacing the field through Friday’s practice sessions, Maxson converted his pole position on Saturday in his first career TC America victory and proving it was no fluke, added his second victory on Sunday.

Copeland added, “Tyler has really come into his own as of late, and I feel that this could be the turning point of his season. He is young, talented and learning each step of the way, but once a driver like him tastes victory, he thrives on that feeling and will be looking for more as our season wears on. With the double win, Tyler also extends his TCA Rookie of the Year points lead.” 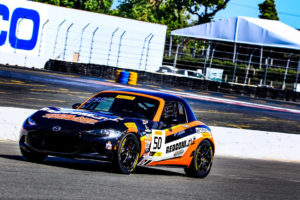 Dinah Weisberg continually improved her results through the weekend. Turning the 16th fastest time in practice on Friday morning, she qualified in the 15th position on Saturday morning. Advancing forward throughout both races, Weisberg finished 13th on Saturday afternoon before crossing the stripe 12th on Sunday, her best result of the 2019 season.

Copeland Motorsports will enjoy one weekend off before travelling to the famed Road America June 20-23 for the next rounds of the Battery Tender Global MX-5 Cup Presented by BF Goodrich Tires. Entering a quintet of drivers, the Maryland based outfit will look to continue their winning ways in Elkhart Lake, Wisconsin.