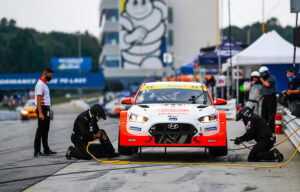 Copeland Motorsports has been busy preparing for the upcoming 2021 season. Immediately wrapping up the 2020 TC America Championship, Copeland Motorsports switched gears and began focusing on their next challenge – entering the IMSA program for 2021. Returning with the team for the upcoming season will be the duo of Tyler Maxson and Tyler Gonzalez, who will be competing in the 2021 IMSA Michelin Pilot Challenge in the #27 Hyundai Veloster N.

Maxson and Gonzalez are set to make the perfect pair for their debut year in IMSA. The duo started out as teammates with Copeland Motorsports in 2019 in the Global MX-5 Cup series and again in 2020 in TCA America. After working together and with Copeland Motorsports over the past couple of seasons, the team has turned into a well-oiled machine over the past couple of seasons.

This past season, Maxson and Gonzalez earned a combined 14 wins in TC America with Tyler Maxson earning the TCR Championship and Tyler Gonzalez finishing third in the TCA Championship. Now, with 2021 plans in place, the duo expects nothing less from the upcoming season.

In preparation for next year, Copeland Motorsports entered Maxson and Gonzalez in two IMSA Michelin Pilot Challenge events. Earlier in October, they made their debut at Michelin Raceway Road Atlanta for the Fox Factory 120 where, after qualifying sixth, they were able to lead the race in the later stages and ultimately finished second against the season regulars.

To officially finish out the 2020 year, Maxson and Gonzalez will compete together in one final race next weekend, November 11-14, in the Alan Jay Automotive Network 120 at Sebring International Raceway.